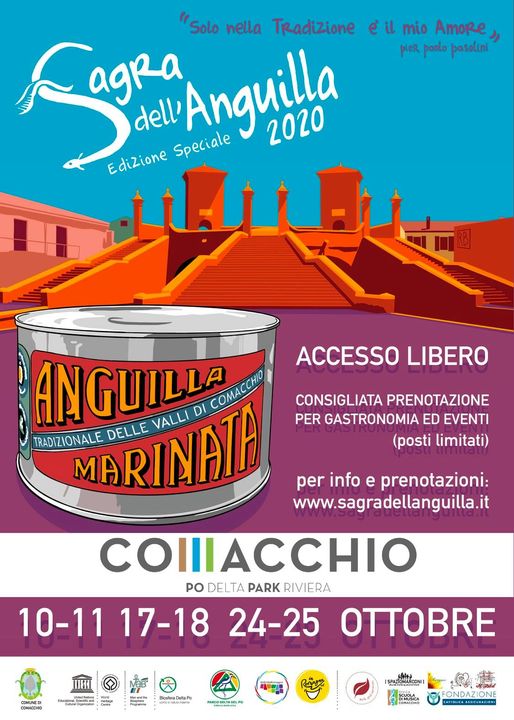 On weekends from 10 to 25 October the Eel Festival returns to Comacchio. An event, now in its 22nd edition, capable of attracting tourists from all over the peninsula to pay homage to the Queen of the Valleys.

The combination of Comacchio and eel is inseparable because it evokes the fishing valleys, the celebration of fish in all the gastronomic nuances that tradition offers. The twenty-second edition of the Festival will be truly "special": protected by health protocols and related security measures, it presents itself in the unusual form of the widespread celebration that will extend throughout the historic center, from the monumental Trepponti to the Manifattura dei Marinati, a symbolic place that it houses the Fire Room where eels are still roasted today.

The inauguration of the festival is set for Saturday 10 October. Also on the same date, the traditional landing in Comacchio of the "Salt of the valleys" collected during the summer is scheduled. On the first day of the festival, the inauguration and opening to the public of the restored vinegar room, annexed to the Manufacture, where once the vinegar used to marinate fish was stored in vats and barrels.

This year the festival will not feature the large food stand, usually set up in Largo Fattibello. The gastronomic offer will in fact be presented in the formula of widespread hospitality, distributed in various parts of the city: the watchwords will be safety and booking. At the Manifattura dei Marinati, therefore, next to the twelve historic and still operational fireplaces, and the adjoining Aceti Room, there will be a restaurant, tastings and close encounters with taste. A food stand will instead be active at the “Ider Carli” sports field a few steps from the Manufacture. These will be joined by numerous temporary catering areas as an extension of the restaurants in the historic center that will offer traditional menus dedicated to the festival. In compliance with the anti-covid directives, places will be limited and therefore reservations are recommended (both for permanent restaurants and for stands and temporary administration areas).

The market will be structured in several areas: food and wine area (Duomo area), typical area (piazza Folegatti) art and genius area (via Zappata). There will also be appointments with music and moments of in-depth study: the Arena of Palazzo Bellini and the pronaos of the Ancient Delta Museum will be the symbolic places where the program of the Festival will be concentrated, which also includes the participation of local associations which will give life to a real community party. To create a connecting route between the coast and the historic center, a continuous connection service between Comacchio and Porto Garibaldi will be organized by two panoramic trains.

As always, then, the territory will give the opportunity to participate in suggestive excursions immersed in the spectacular nature of late summer, such as the one by boat or the walk to discover the Salina and the pink flamingos, which here every year nest and offer a natural spectacle of rare beauty.

Museum lovers can instead take the opportunity to visit two art treasures: the first is the Ancient Delta Museum which illustrates, through the display of truly unique finds, the evolution of the territory and of the human settlements that have characterized the history of ancient Po delta. The second is the Remo Brindisi House-Museum, a modern structure immersed in the green of the pine forest of Lido di Spina and summer residence of the master Remo Brindisi until his death, which was built in the years between 1971 and 1973 on project by architect-designer Nanda Vigo. A museum of extraordinary importance in whose collections stand out the works of masters of the twentieth century such as Medardo Rosso, Giacomo Balla, Filippo De Pisis, Andy Wharol, Lucio Fontana, Bruno Munari and many others.


A festival in safety

The organization will adopt all the safety measures prescribed by the precautionary protocol developed by the Emilia-Romagna Region specifically for the festivals.

There will be no big food stand that characterized the last few editions. Two tasting points will be placed at the Manifattura dei Marinati, with use of the adjoining restored vinegar room and the Ider Carli sports field
The restaurants will expand their areas of administration towards the outside of the premises, applying all the preventive measures envisaged for catering.

All accesses to the historic center will be manned.
The use of masks and preventive sanitation of the hands will be a must.
An adequate number of employees will also monitor to avoid gatherings.

For the events and markets, the prescribed prevention measures will be scrupulously adhered to, already widely tested successfully during the summer.
Booking is recommended for access to all activities.

We and selected third parties use cookies or similar technologies for technical purposes and, with your consent, also for other purposes as specified in the cookie policy.
If you close this banner with a tick or click on "Decline", only technical cookies will be used. If you want to select the cookies to be installed, click on 'Customise'. If you prefer, you can consent to the use of all cookies, including cookies other than technical cookies, by clicking on "Accept all". You can change your choice at any time.